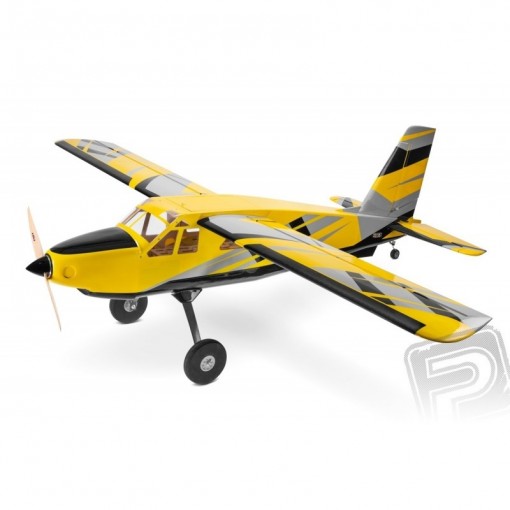 The Legacy Aviation Turbo Bushmaster raises the bar for Sport/Scale fun and excitement! Based on the venerable Turbo Beaver, one of the all time great bush planes, this Cody Wojcik design is quite simply one of the best flying RC planes we've encountered. We passed the sticks around at numerous flying events in 2015 and the response was overwhelming! "I gotta get one of these!" is what we typically heard.

Big and light, the Bushmaster is as gentle and forgiving as any trainer we've ever flown, making for a very enjoyable and relaxing flying experience. Flip the rate switches and the model transforms into an extremely capable aerobat! Experiment with the various flap mixes that are possible and you open up a whole new envelope of high lift/high drag maneuvers. Although the Bushmaster spans 84" our prototypes have typically finished out below 8 pounds! You can imagine how "floaty" a model of this size is at that weight!

The Bushmaster features a 2 piece wing mounted on a carbon wing tube that is easily removed for transport. It is designed around our Torque 4016T/500 outrunner and Airboss 80 Amp controller and uses a 16x7 prop and 6S 3300-5000 mah batteries for best performance. It uses 6 metal gear mini servos (our prototype models were flown with Hitec HS-5245 and 7245 servos). A modern computer radio with at least 7 channels is required to take advantage of all of the functions this model is capable of.

A float kit that is extremely easy to assemble and install will be available soon which will add yet another dimension of fun and excitement to this amazing model!

Electric Motor
Torque 4016T/500 MKII with 6S 3300-5000mAh, 16x7 prop or similar
Electronic Speed Control
Talon 90
Note: Due to the location of the ESC in relation to the battery, a battery lead extension of 8-10" is required.
Note: A separate Rx battery or independent Battery Eliminating Circuit (BEC) must be used. The BEC on board the Airboss 80 is not sufficient to power six servos. We recommend the Castle Creations BEC (10 amp).