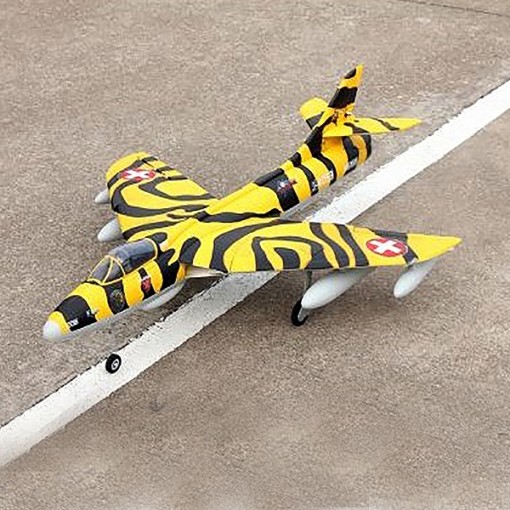 The Hawker Hunter is a transonic British jet-powered fighter aircraft that was developed by Hawker Aircraft for the Royal Air Force (RAF) during the late 1940s and early 1950s. It was designed to take advantage of the newly developed Rolls-Royce Avon turbojet engine and the swept wing, and was the first jet-powered aircraft produced by Hawker to be procured by the RAF. On 7 September 1953, the modified first prototype broke the world air speed record for aircraft, achieving a speed of 727.63 mph (1,171.01 km/h; 632.29 kn).

In November 2020, the Dynam team began meticulously building this new Hawker Hunter EDF jet, with 6S Tomcat 2860-KV2200 in-runner brushless motor and Tomcat Skylord-80A ESC alongside a 70mm 12-blade EDF. In addition, The wing load design of the aircraft is lower, and the flight experience is more smooth and easy-to-fly. The fuselage space is large, and the space for storing the battery is large enough for the recommended battery and more. A special feature, worth pointing out is that this aircraft uses a 10-minute quick assembly design and a removable wing design, which makes the entire fuselage structure more compact and durable - easy to build and disassembleand portable. The rudder surface connecting rod adopts a ball-end joint connection, which reduces the gap, along with the split flap design, makes the plane more realistic and more functional. Equippedwith metal retractable landing gear and digital metal steering gear. Overall it's a leap up in both quality and design.

Radio Req: 6CH and above