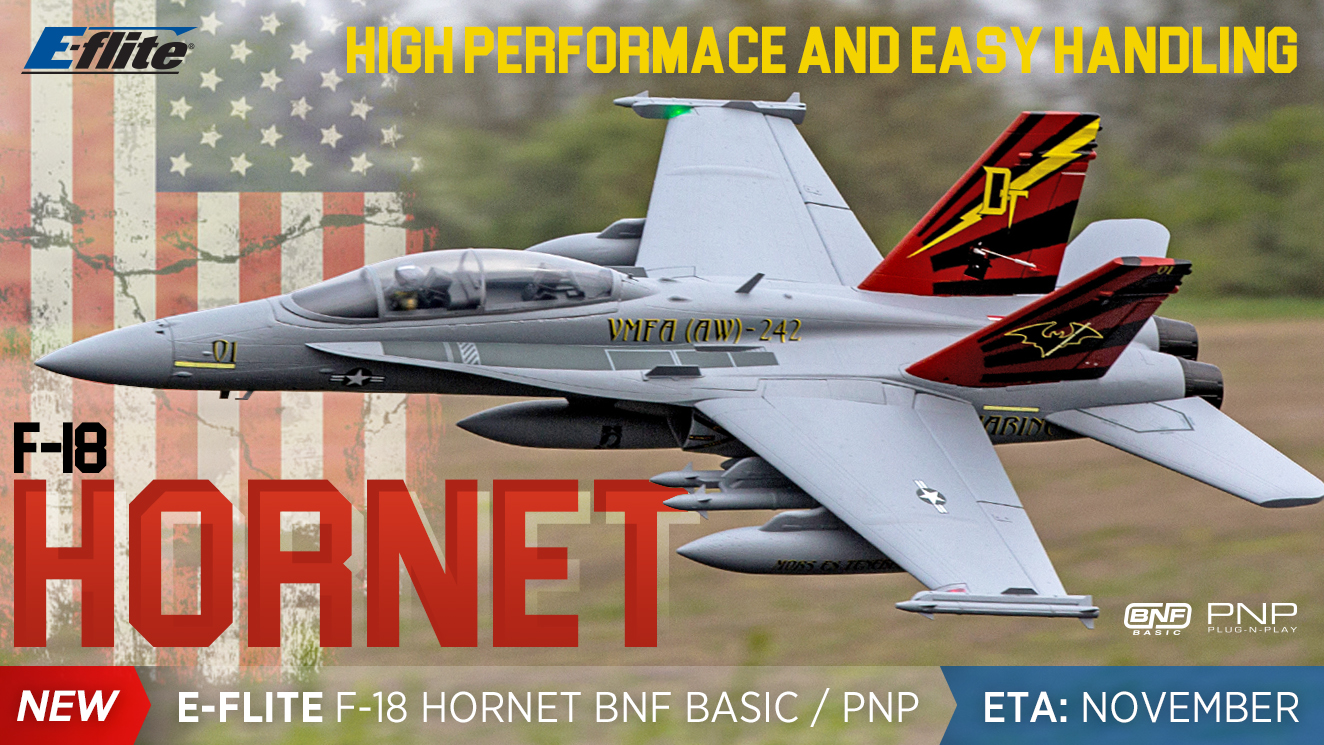 Designed by McDonnell Douglas (now Boeing) and Northrop, the F/A-18 Hornet is used by the U.S. Navy and Marine Corps as both a fighter and an attack platform. Air forces of several other nations fly the F-18 as well. This replica has been modeled after the F/A-18D two-seat variant, operated primarily by the U.S. Marine Corps in night attack and Forward Air Controller (Airborne) [FAC(A)] roles. The trim and color scheme are taken from the U.S. Marine All-Weather Fighter Attack Squadron 242 – the "Bats" – based in Iwakuni, Japan. An all-new design for experienced RC pilots, the E-flite® F-18 Hornet 80mm EDF provides an exceptional flying experience highlighted by an abundance of Extra Scale details and functional scale features including factory-installed LED lights, full-flying stabs, operational flaps and more!

The E-flite® F-18 Hornet 80mm EDF features an all-new design with the size, scale details, functional features and performance to deliver an unmatched flying experience. With 6S LiPo power its V2 12-blade 80mm fan, high-RPM brushless inrunner motor and 100A ESC deliver fantastic performance with virtually instantaneous throttle response. This power system also provides better performance and longer flight times than the 6S-compatible power systems used in larger models — plus it offers a turbine-like sound! An abundance of Extra Scale details including molded-in panel lines and hatches, removable ordnance and drop tanks, a pilot figure and more take the appearance to another level. Functional Extra Scale features include LED navigation lights, full-flying stabs and operational flaps, plus retracts and sequenced gear doors. It's also equipped with the most scale-like landing gear of any F-18 EDF model yet, and the shock-absorbing, trailing-link struts are painted white for an even more realistic appearance. Constructed of durable, fully-molded EPO material, no glue is required for assembly and it can be ready to fly in less time than it takes to charge a battery!

What's in the Box?

This is the first high-performance F-18 Hornet model equipped with exclusive Spektrum™ AS3X® and SAFE® Select technologies. AS3X works behind the scenes to smooth out the effects of wind and turbulence to deliver a locked-in feel that makes it seem like you're flying a much larger airplane. Optional-use SAFE Select offers pitch and bank angle limits along with automatic self-leveling that can be turned on and off at the flip of a switch, making this an easier to fly Hornet than there's ever been before! And if you don't want to enable the SAFE Select features, simply bind the receiver normally and only AS3X will be active.

Construction with fully molded EPO material makes it possible to replicate complex detail and shapes in a lightweight yet durable form. The result is an outstanding scale appearance that's easy to maintain and delivers the best possible flight experience. The factory-installed metal-geared servos with ball-link equipped linkages deliver crisp and precise control at every speed.

No glue is required for assembly and you can have the F-18 ready to fly in less time than it takes to charge a battery! The stabs plus the two-piece wing bolt into place and can easily be removed for convenient storage and transport.

The factory-applied paint and decal finish pays tribute to the U.S. Marine Corps VMFA(AW)-242 "Bats" squadron, while providing excellent visibility and a model you'll be proud to show off everywhere you go.

Already own a Spektrum™ transmitter? Bind-N-Fly (BNF) aircraft make getting into the air quickly and with the best control experience possible easier than ever. They come out of the box with the power system, servos and a Spektrum 2.4GHz receiver installed so all you need to do is bind the receiver to a compatible transmitter, finish any final assembly, and fly!

This Bind-N-Fly Basic model is equipped with a Spektrum 2.4GHz DSMX® receiver featuring AS3X (Artificial Stabilization–3–aXis) technology that works behind the scenes to smooth out the effects of wind and turbulence. The result is a heightened sense of stability and precision that makes you feel like you're flying a much larger, expertly tuned aircraft.

If this is your first model of its type, or you want an extra margin of safety while familiarizing yourself with the airplane, you can enable the optional-use SAFE® Select flight envelope protection technology built into the receiver. No programming is required. Simply change up the binding sequence as directed in the manual.

With SAFE Select enabled, you get:

Pitch and Bank Angle Limits - These envelope limits keep the airplane from rolling or pitching upside down. They also prevent excessive climb or dive angles.

Automatic Self-Leveling - The airplane instantly returns to and holds level flight when the sticks are released and in the center position. It's also helpful for keeping the wings level during takeoffs/launches and landings.

Easy Switch Assignment - No Programming Required - The simple procedure for assigning a transmitter switch to turn SAFE Select features on and off doesn't require any programming and takes just a few seconds.

If you don't want to enable the SAFE Select features, just bind the receiver normally and it will function like a standard AS3X receiver.