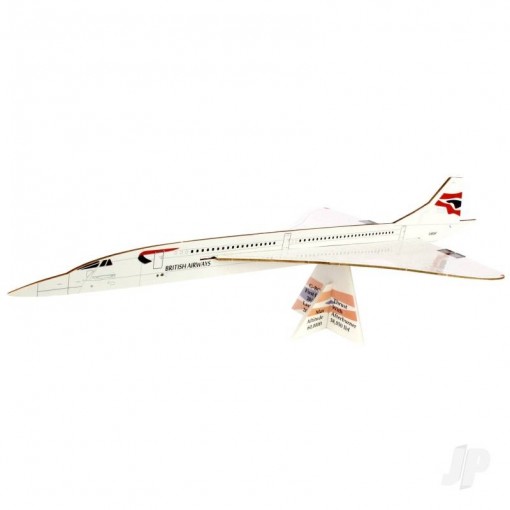 Concorde Alpha Foxtrot (G-BOAF) was the last Concorde to enter airline service and the last to fly! Possibly the sleekest, coolest, space-like, supersonic machine made by man - the Concorde most certainly deserves its place in history. This Anglo-French passenger airliner, powered by four Bristol Olympus turbojet engines, first flew in April 1969 and was operated from 1976 to 2003. It had a maximum speed of 1,350 mph (Mach 2.02) - over twice the speed of sound - simply astonishing! It flew from London to New York in just 3 1/2 hours - WOW!
Prestige Models are thrilled to introduce you to this accurate scale flying balsa model of the spectacular Concorde Alpha Foxtrot, now one of the stars of the Aerospace Bristol museum - www.aerospacebristol.org - so should you like to see the actual aircraft then a visit would be in order.
Only 20 sleek, delta-winged Concordes were built and just 14 were delivered to two airlines - seven each to British Airways and Air France. Concorde entered service with both airlines on the 21st January 1976 with services from Paris to Rio de Janeiro and London to Bahrain. From 24th May 1976, up to 100 passengers at a time were crossing the Atlantic in under three and a half hours, flying twice the speed of sound in the Anglo-French Concorde.
Like the rest of the Concorde fleet, Alpha Foxtrot boasted superlative service and cuisine, exclusive airport lounges and stratospherically high airfares. The seats were made of soft Connoly leather and the uniforms of the cabin crew were super smart. The Champagne flowed as Concorde passengers flew far above other flights and cruised faster than fighter jets to their destinations. You may be surprised to learn that the cabin was narrow compared with modern commercial aircraft, but the film and TV stars and top executives criss-crossing the Atlantic rarely complained - it was about prestige and speed!
Concorde Alpha Foxtrot was the last to be built - first flying from Filton, just north of Bristol, on 20th April 1979 - last to enter service with British Airways on 12th June 1980, and the last to fly - returning home to her birthplace on 26th November 2003, watched by thousands. She was also the last of the 18 surviving Concordes to find a permanent home, first spending more than a decade sat outdooors beside a runway at Aerospace Bristol museum. It seems very fitting, especially as this magnificent aircraft was designed at Filton, built there and landed there for the final time. As one of the crew has scribble on the inside of the fuselage; Gone but never forgotten. G-BOAF is home".