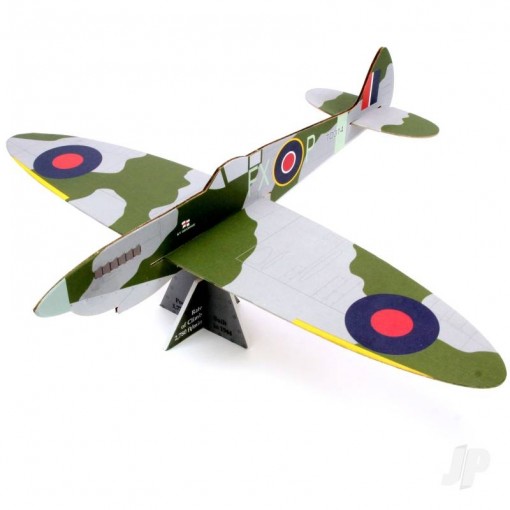 Not only was the Spitfire one of the most famous British aircrafts of the 20th century; it was also one of the most consequential aircrafts of the Second World War. The Spitfire was continously improved during WW2 and the Spitfire Mk IXe entered service in the Summer of 1944. It featured a Merlin 70 engine which allowed for a maximum speed of 404mph. It could climb to a maximum altitude of 42,500 feet, with an incredible power (for it's time) of 1,720hp! The rate of climb was 4,745 feet per minute.
Prestige Models are thrilled to introduce you to this accurate scale flying balsa model of the fabulously ferousious WW2 fighter - Spitfire Mk IXe. An exemplary real-size example of this WW2 figther is based in Headcorn Aerodrome so should you require a look at the actual aircraft then a visit may be in order.
The iconic Spitfire Mk IX TD314 was built at Castle Bromwich in 1944 and fitted with a Merlin 70 engine as a High Level Fighter. After various moves, she ended up with the 234th Squadron at Bentwaters on the 26th July 1945, ready for service in this squadron's colours and with the squadron codes of FX-P. Whilst with the 234th Squadron it is possible that the TD314 took part in the 1945 Battle of Britain flypast over London.
When the 234th Squadron converted to Meteors, the Spitfire Mk IX TD314 was transferred on the 27th February 1946 to 29 Maintenance Unit at High Ercall for disposal. However, in early 1948 she was selected as one of the 136 Spitfire Mk IXs to be sold to the South African Air Force and she arrived in Cape Town on the 12th May 1948. Details of her use with South African Air Force is not know but she was sold for scrapping to the South African Metal & Machinery Co sometime during 1954. She remained in the scrap yard until recovered by Larry Barnett of Johannesburg in 1969. From there she passed through the hands of several owners before arriving in the UK via Canada in 2009.
Acquired by Aero Legends in 2011, restoration commenced at Biggin Hill culminating in a first flight on the 7th December 2013. The Spitfire Mk IX TD314 is heavily featured in the Haynes manual on Spitfire restoration having its pride of place on the front cover. She has been named "St. George" which is P prominently desplayed on her fuselage.